Join us as we trace the history of one of the former DC institutions that now houses the Milken Center for Advancing the American Dream.

The Milken Center for Advancing the American Dream is located in the historic buildings that housed Riggs Bank and the adjoining American Security and Trust Company. For over a century the buildings have stood on the corner of 15th Street and Pennsylvania Avenue Northwest in Washington, DC, just up the street from the White House. We’ve talked about the history of Riggs Bank, and now we wanted to focus on its partner and neighbor, the American Security and Trust Company. The American Securities and Trust grew and shifted alongside national trends in banking and money management as our country grew and developed in the second half of the 19th Century.

After the Civil War, many large corporations were founded around the country as America continued to grow and industrialize. This in turn led to many individuals rapidly accumulating large sums of wealth. These wealthy individuals now needed somewhere to hold and manage their money and investments, and one might assume they would turn to banks. However, in the same period, the federal government created a number of anti-trust laws to guard against monopolies in banking, restricting what services financial institutions could offer. Major shareholders from Riggs Bank were frustrated with these anti-trust regulations that forbade them from managing trust funds for this new crop of wealthy individuals. In response to the laws, they gathered enough money to establish a separate trust management company, the American Security and Trust Company (AS&TC).

The Trust was first formed just across the river in Alexandria, Virginia in 1889, but when a DC law allowed new types of banks in the District, it moved its headquarters into the city on G Street in 1890, becoming the second trust in the District. It grew rapidly and moved into its new, larger building at 1501 Pennsylvania Ave in 1905. This Neoclassical Revival building was designed by York and Sawyer, who also designed its neighbor the Riggs Bank. The Trust quickly became a major player in DC real estate and financed notable places around the District that you might recognize [link to post 2], as most other banks were unable to finance these endeavors under federal laws. . In addition to being an early trust, it was also one of the first D.C. banking institutions to have a women’s department—facilities with separate staff and assistance for deposit slips, drawing checks, other instructions, along with a ladies lounge, elevator, and section reserved for women using vaults.

In this period, trust companies were considered more liberal banking institutions, and their charters allowed them to expand into a variety of services. They generally required securities—or financial assets that could be claimed if someone defaulted on their loan—that were easily saleable, but one could also access loans that used real estate as their security. The Trust also offered investment options, and the ability for the investor to pay taxes and buy investment insurance. Essentially, trust companies legally act as agents or intermediaries for individuals who use them to hold and manage their assets, including investing them or holding them for future generations.

Charles J. Bell became president of American Security and Trust Company in 1893 and led the institution’s growth and adaptation over the next 35 years of his tenure. Bell was friends with Riggs Bank president Charles C. Glover, a fellow civic leader and businessman. Both contributed to the development of DC through philanthropic endeavors and urban planning: they were instrumental to the development of the Mall, the designation of Rock Creek as a park, and the construction of the National .  The coordinated classical design of their building on 1501 and 1503 Pennsylvania Avenue conveyed seamlessness and trust between the two banks.

Their friendship and common goals carried over into their bank business practices: Riggs would point customers to AS&T’s trust services that it could not perform, while AS&TC would do the same for Riggs’s commercial banking services it could not provide. It was common for banking institutions at the turn of the century to reach these informal “understandings” as the federal laws placed limitations on the various types of banks. This understanding naturally occurred between AS&TC and Riggs Bank. This partnership remained an essential part of the business operations for both institutions for years, until the Federal Reserve Act of 1917 led to its dissolution. Under the Act, national banks could establish savings and trust departments, and Riggs Bank took advantage of this expansion, so it no longer needed the Trust.

In spite of the change in the relationship between the Trust and Riggs, Bell still found ways to grow the company. In 1919, as antitrust restrictions eased and the AS&TC was able to purchase Home Savings Bank, thereby expanding into commercial banking services. After this merger, AS&T grew substantially. By 1970, it had survived the stock market crash and Great Depression, purchased three other banks, became a member of the Federal Reserve, entered the international banking market, and was the second-largest bank in DC. In 1973, American Security and Trust Company shortened its name to American Security Bank—“bank” now reflecting the breadth of functions it provided. 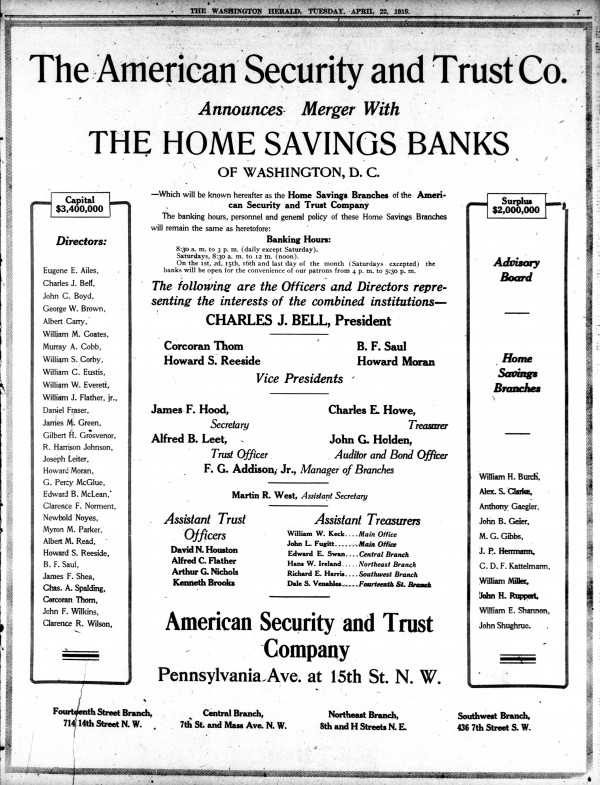 Nearly 15 years later in 1987, American Security Bank merged with Maryland National Bank and became MNC Financial, creating the largest bank in the Washington-Baltimore area (although MNC Financial kept the Washington bank operating under its American Security Bank name). Another merger and name change happened in 1993, when the megabank was purchased by NationsBank from Charlotte, North Carolina, making NationsBank the fourth-largest in the country.  A few years later in 1998 it became the largest when it purchased San Francisco’s BankAmerica and renamed to the well-known Bank of America, still currently headquartered in

American Security and Trust Company’s history shows an adaptability that is characteristic to banks in America. Across its history, through diverse services, institutions mergers and consolidations, and quick responsiveness to the market, the DC trust company was able to survive and grow into one of the biggest banks in the U.S.