The currently-under-construction home of the Milken Center for Advancing the American Dream has long stood at a historic intersection in Washington, DC. Due to its proximity to the White House, the Treasury, Lafayette Square and the National Mall, the building has witnessed moments of immense joy and powerful calls for change, most recently with the protests surrounding police brutality and the death of George Floyd. Just within this past year, we’ve seen the celebratory parade of the Washington Nationals’ first World Series Championship win as well as large-scale protests calling for systemic changes across our country. Today, we are revisiting some of the historic and impactful moments that have occurred on the stretch of Pennsylvania Avenue, where our building sits. 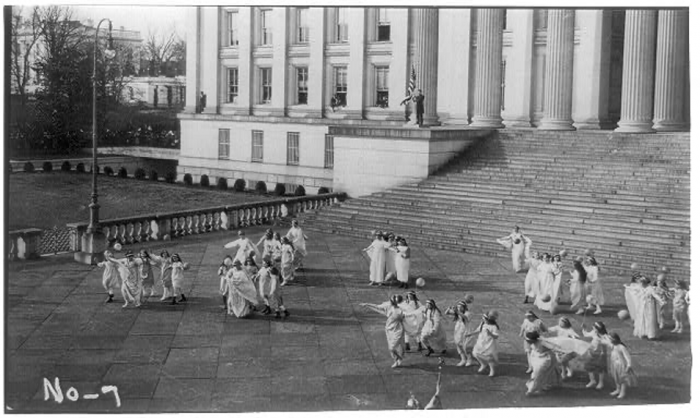 The Women’s Suffrage Movement gained significant momentum on March 3rd, 1913, when over five thousand women and men, most dressed in white, marched together through Washington, DC. The parade began at the U.S. Capitol and made its way along Pennsylvania Avenue to the Treasury Building across the street from the Center. The marchers met with thousands of spectators who lined the street. Not all of them were peaceful. The parade faced violent and hostile crowds resulting in, by the end of the day, over one hundred marchers injured and in the hospital. This did not deter the marchers, however. They continued to their final destination on the steps of the Treasury. Spectators witnessed performances and speeches claimed to be, by the New York Times, "one of the most impressively beautiful spectacles ever staged in this country." 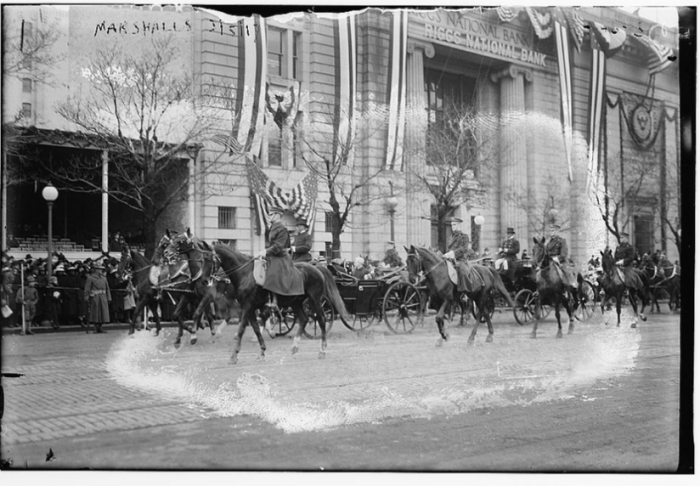 The day after the Women’s Suffrage Parade, Woodrow Wilson was inaugurated as the 28th President of the United States. His Inauguration Day contrasted somewhat with the spectacle and liveliness of the previous day, as at Wilson’s request, the Inaugural Ball was cancelled because he felt it was inappropriate for what should be a solemn day. He did not prevent all pomp and circumstance though.  His presidential parade carried on down Pennsylvania Avenue, directly in front of the Riggs Bank building, which was covered in patriotic bunting for the occasion. 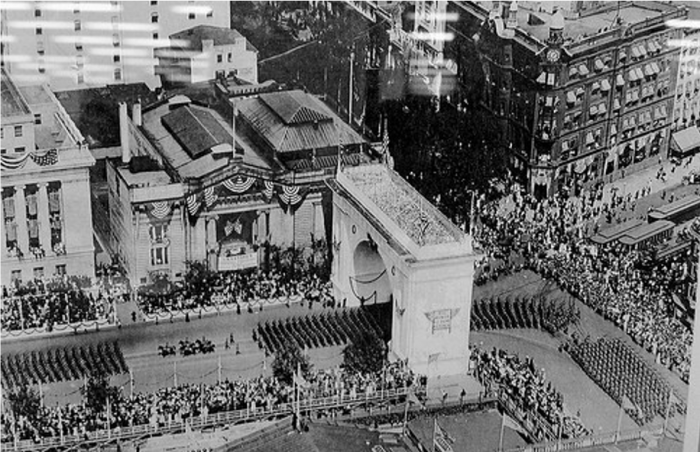 The victory parade shown in this photograph, held on September 17th, 1919, was led by General John J. Pershing and commemorated U.S. troops returning home from Europe after World War 1. The parade mirrored the grand military procession that had taken place in New York City two days prior. Thousands of soldiers made their way, on Pennsylvania Avenue, from the U.S. Capitol towards the Treasury. As in New York City, the celebration included the temporary assembling of a triumphal Victory Arch, which organizers placed at the intersection of 15th Street and Pennsylvania Avenue. The Center's home silently watched it all. 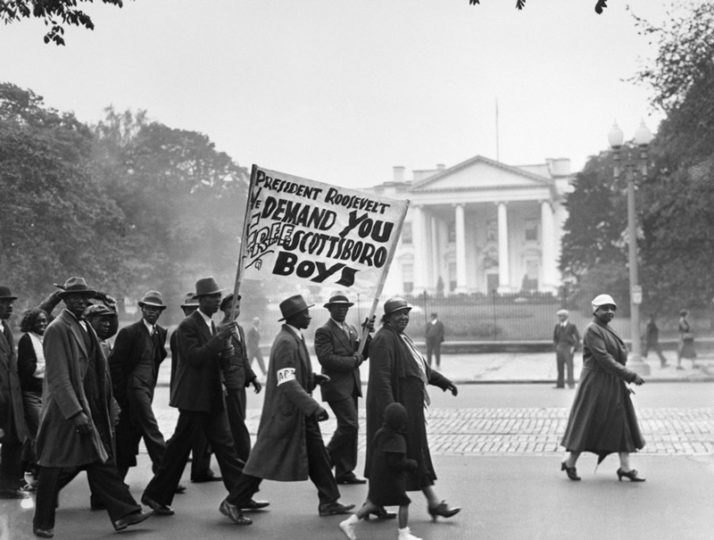 In May 1933, six months after the U.S. Supreme Court had ruled in favor of granting the Scottsboro Boys a new trial, 4,000 protesters marched across Washington, D.C. in support of these nine black teenagers who had been falsely accused and convicted of rape in Alabama, eight of whom were sentenced to death. One of the leaders of the protest was the white woman who initially accused them. She had since recanted her testimony and now supported their freedom, as they awaited their next round of trials in Alabama. On May 8th, the protesters marched up Pennsylvania Avenue towards the White House in order to capture President Roosevelt’s attention and to request a meeting, which he declined, so instead they passed him a letter with their requests. In it, the protestors urged not only for justice for the Scottsboro Boys, but for greater racial justice in general. Along with the murder of Emmett Till,  the case of the Scottsboro Boys is seen as one of the early catalysts for the Civil Rights Movement.

Friends, family members, and concerned citizens continued to push for the Scottsboro Boys’ freedom until the last of them were posthumously pardoned in 2013. Fortunately, none were ultimately put to death for the accused crime; however, they faced continued hardships and legal battles for the rest of their lives. You can learn more about the numerous trials of the Scottsboro Boys here. 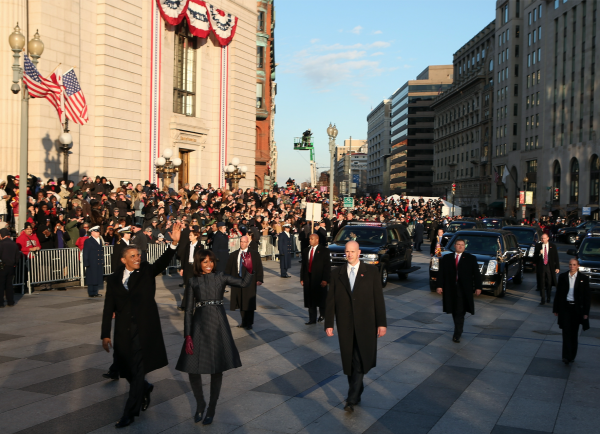 As during President Wilson’s inauguration, our building stands as a backdrop, covered in patriotic bunting, for President Obama’s second Inaugural Parade in 2013. During his Inaugural address at the Capitol, Obama focused on the spirit of resilience in America and the American people’s ability to come out stronger through periods of hardship, in a statement that feels particularly relevant during this period of upheaval. “America’s possibilities are limitless, for we possess all the qualities that this world without boundaries demands:  youth and drive; diversity and openness; an endless capacity for risk and a gift for reinvention.” 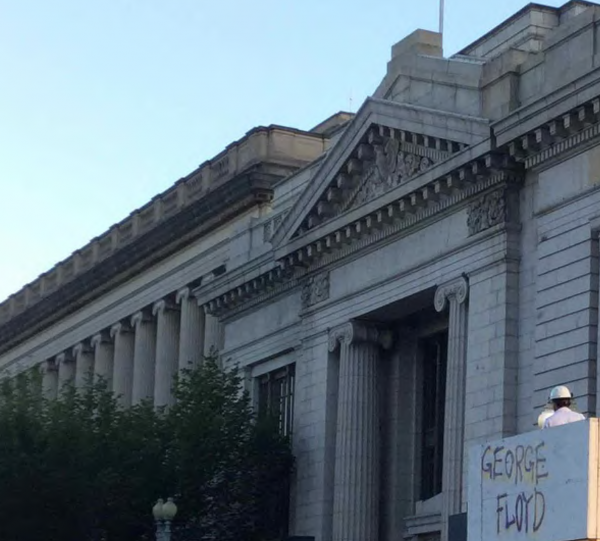 On May 29th, the first protests sparked by George Floyd’s death broke out across the country, including in Washington, DC. Several hundred protesters marched from 14th and U Street Northwest towards the White House and remained there well into Saturday morning, standing in support of Black Lives Matter and against police brutality.  Over the course of these protests in and around Lafayette Square, a number of buildings, including our own, were tagged with references to the movement. The contents of the graffiti varied, ranging from anti-police statements, to George Floyd’s name, to a phrase in Latin, shown below. The phrase “quis custodiet ipsos custodes” means “who will guard the guards themselves” and originates from Roman poet Juvenal’s Satires. The protests have continued for weeks as Americans continue to gather in order to raise their voices in support of change.

Our building has long borne witness to many important moments of American history. It has seen the power of collective action, both in times of celebration and in the face of injustice. In the past few weeks, we have all seen the calls for equity and systemic change taking place across our country, and on our very corner. In the next few months, our building will see the 59th presidential inauguration occurring in the same location where protesters and revelers have walked for over a century. The Center feels fortunate to be restoring a building, the Riggs National Bank, that has held a front-row seat during significant moments of American history and we hope to bring the building into a more active role in making the American Dream achievable for everyone through our work. We look forward to welcoming you to our new Visitor's Center in 2023 and, together, working towards opening access to opportunity for a better, equitable future.