As anyone who has visited Washington, DC knows, the districts and neighborhoods that form our nation’s capital are just as historic and architecturally impressive as the monuments themselves. Our new Visitor Center is located in the historic Lafayette Square District, which encompasses many popular tourist locations and federal buildings. Lafayette Square is a dynamic community with a fascinating history that has been protected through various preservation efforts that shape the neighborhood even as we continue to add to its story today.

Lafayette Square, located immediately north of the White House, is one of the very first neighborhoods that was created in the District of Columbia when it was founded in 1790 and is now a landmarked district, famous for sites such as St. John’s Church, the United States Treasury, Decatur House and other private residences which have been owned by important DC figures over time. Originally intended to serve as the President’s private park, Lafayette Square has fulfilled many different roles over time.

During the 1700s, this land was used as an apple orchard, zoo, graveyard, and even as a racetrack. Starting in the early 1800s, the Lafayette Square neighborhood became a distinguished and desirable place to live. St John’s Church was established in 1815, directly across from the White House, and the neighborhood’s first private residence, the Decatur House, was built in 1818. It wasn't until 1824 that the square's name was changed from President's Park to Lafayette Square, in honor of Marquis de Lafayette who fought in the Revolutionary War. The statue of Lafayette that now sits in the center of the Square was not created until 1891, however.

As Lafayette Square became increasingly accessible to the public, the neighborhood changed around it.  This residential neighborhood included the homes of William Wilson Corcoran and George Washington Riggs, while the commercial sector housed the bank they co-founded which eventually became the historic Riggs Bank building which is now our Visitor Center. As theaters, banks, and private clubs opened and closed there came a desire to preserve the historical elements of this neighborhood. Various Presidents and first ladies undertook the mission of conserving the character of this community over the years. For example, during his Presidency, Franklin Roosevelt acquired the Blair and Lee Houses as federal property, out of a desire to protect these historically significant homes.

It is perhaps Jacqueline Kennedy, however, who had the greatest impact on the neighborhood. During her husband’s term, Mrs. Kennedy used her expertise in history and art history to argue for the protection and historic preservation of the Lafayette Square area. In the early 1960s, Congress authorized the demolition of the buildings located to the east and west sides of Lafayette Square in order to make room for new high-rise federal office buildings. Hearing this news, Mrs. Kennedy began to fight against this destruction of historically significant buildings, even going so far as to write a letter to the General Services administrator at the time, Bernard Boutin. In this letter, Kennedy acknowledged the desire to showcase modern architectural styles, but argued that Boutin should write the architects and "tell them to submit a design which is more in keeping with the 19th-Century bank on the corner," likely referring to our landmarked buildings.

The architect, John Carl Warnecke, decided to take on this challenge by creating a more integrated solution for introducing new federal buildings into this community. Warnecke carefully studied the neighborhood's existing layout and crafted his designs so that new buildings would rise up behind the existing rowhomes. This plan was crucial in protecting both the historic homes and the look and feel of the neighborhood from the ground, while also allowing for growth in an active downtown business district. The design proved that old and new buildings in DC could coexist while still protecting the vibrancy of these historic buildings and neighborhoods. 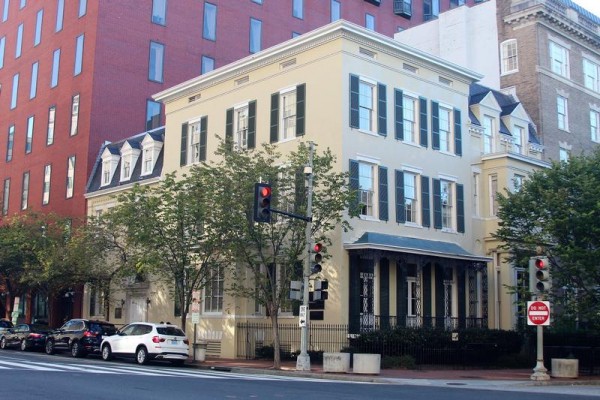 In acknowledging the need for new construction, while also appreciating the historical significance of many of the buildings in Lafayette Square, Kennedy and Warnecke paved the way for future developments in the District. This concept of allowing the present to be shaped by the past in a meaningful way symbolizes the interaction between past and present that is so tightly woven into the fabric of our nation’s capital, and indeed, our identity.

By preserving the Lafayette Square Historic District, visitors now have the opportunity to visually engage with this community both as it was a century-and-a-half earlier and as a thoroughly modern space where history continues to be made. In the summer of 2020, for example, with these historical buildings acting as a backdrop, protesters marched against the killing of George Floyd as a part of the Black Lives Matter movement and a larger wave of social justice action. These protests add to a longstanding history of protest in Lafayette Square, with causes ranging from women’s suffrage, to LGBT rights, to the Vietnam War. In Lafayette Square, modern issues coexist with historic landmarks, fulfilling Jackie Kennedy’s mission to make room for the future without erasing the past.