Milken Educator Julie Cajune has built her career developing curricula about tribal histories for schools and museums, including the National Museum of the American Indian. We asked her some questions about the significance of her work in understanding the role of indigenous peoples in the U.S. today, and what the American Dream means to her.

How did you first get involved in designing educational materials about tribal histories?

My first teaching job was in a bilingual program here on my home reservation, the Flathead Indian Reservation. I taught 4 classes of grades 1-4 content that included local tribal history and culture with the integration of basic Salish language. As there were no teaching materials available, I had to develop my own. This was the beginning of decades of my work as an educator.

What led you to build on this work?

I was recruited for a bilingual teaching position by a visionary principal, Terri O’Fallon. She implemented a bilingual grant program to address gaps in literacy rates among American Indian students, but also to provide a more inclusive and just curricula. I was planning to just have my own classroom and honestly, it took some persuasion for me to even have a conversation with Terri about the position. Through that conversation and subsequent ones with the Salish Culture Committee, I realized there were few tribal members with teaching credentials. I made the decision to take the job based on my belief in a generational responsibility to contribute to my community. The position then led me to my work addressing the absence or distortion of educational materials on American Indian people and nations.

During my public school career, there was sparse mention of any American Indian content. As a novice teacher, I entered my career with an assumption that things had improved. They had not. American Indian commercial curriculum was often generic or pan-Indian, which resulted in stereotypes and superficial or inaccurate content. I realized that there was a critical need not just locally, but nationally. Fortunately, about 9 years into my educational career, the State of Montana passed the law, MCA 20-1-501, that interpreted the state’s 1972 constitutional language: the state recognizes the distinct and unique cultural heritage of American Indians and is committed in its educational goals to the preservation of their cultural integrity.

This law requires Montana public schools to include American Indian content in their curriculum. This began a statewide collaboration among educators and Montana tribes to both produce materials and provide staff development for teachers. I was fortunate to work with legislative funding to produce tribally specific materials as well as a basic overview of what all Montana tribes were developing: Montana Tribal Histories: Educators’ Resource Guide and Companion DVD. At this time, I also began collaborating with a variety of groups to produce materials for national distribution.

Last fall, the National Native American Veterans Memorial opened on the grounds of the Smithsonian Museum of the American Indian. You have done a lot of work highlighting the stories of American Indian veterans. What do you think the impact of this memorial will be?

I hope it will provide a space for telling the story of American Indian veterans. American Indians have served in the military at a higher rate per population than any other group. They served in World War I before they were considered citizens of the United States. Their service, commitment, and heroism, alongside racism and prejudice among their fellow servicemen, is a remarkable demonstration of their love and devotion to this land and country. 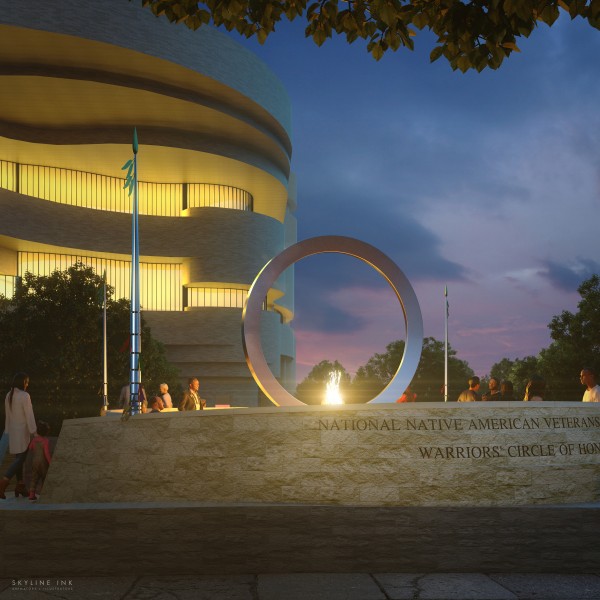 Illustration by Skyline Ink, courtesy of the Smithsonian's National Museum of the American Indian

What is one thing you most want people to know about American Indian history?

As other indigenous nations, my tribe flourished in their homelands, governing themselves and their people as an inherent sovereign nation. That inherent sovereignty was acknowledged and affirmed thousands of years later in treaty negotiations between the U.S. government and tribal leaders. Article VI of the U.S. Constitution declares treaty law to be the Supreme Law of the Land and treaties between tribal nations and the U.S. government remain living, legal documents continually interpreted in courts today.

What is one thing you most want people to know about American Indian people today?

We are still here, and we continue to exist as unique and diverse individuals and sovereign nations.

How would you describe the [historical] impact of the concept of the American Dream on American Indians?

How do we move towards a more inclusive version of the American Dream that recognizes the often-fraught history of American ambition and the treatment of indigenous peoples?

There is power and redemption in truth-telling. The larger story of America must be told for our country to realize herself as a moral leader in democracy. In the telling of this story, the enormous contributions and costs of the evolution of the “United States” would become common knowledge of its citizens. Embracing our fuller history offers potential for individuals to become more humane and society to become more just.

Where do you see that work being done?

I believe this continues to be happening sporadically around the country. State-wide efforts such as Wisconsin, Montana and Washington’s have had some impact on K-12 curricular content. Native Studies programs around the country have certainly made contributions to these efforts. The United Nations’ Declaration on the Rights of Indigenous People has leveraged attention and support for numerous initiatives. As long as these efforts continue to be irregularly undertaken and most often from the initiation of indigenous communities, they will persist in occasional progress rather than systemic change. Justice and inclusion must become everybody’s issue, not just the burden carried by those viewed as “other.” When fully embraced, systemic change will begin.

What is your personal conception of the American Dream?

In his dissent recognizing the Tuscarora Nation’s rights, Justice Hugo Black said, “Great nations like great men, should keep their word.” My conception of the American Dream is for America to truly embody the words in the foundational documents that speak to her identity as a nation—the Declaration of Independence and the United States Constitution. When our nation keeps its word to all—the original inhabitants, and every newcomer—we will have realized the dream called America.