That Which Endures: What We Can Learn From Antarctic Expeditions 100 Years Apart

In 1914, Anglo-Irish explorer Ernest Shackleton, already a public hero for his successful South Pole expedition five years prior, embarked on his “Imperial Trans-Antarctic Expedition.”  Unlike his past expeditions, his journey on the ship Endurance would quickly turn perilous. Four months after setting out, the ship was frozen in an ice floe. For eight months after that, the crew lived on the frozen ship, hoping that the thaw would set them back on their path. Instead, water poured into the ship and it was lost to the ocean’s depths. Despite the cold, the dwindling rations and the ever-shifting ice beneath their feet, the entire crew ultimately survived the endeavor. Beneath the ice in the depths of the sea, the Endurance sat undisturbed for over a century until Wednesday, March 9, 2022, when the Endurance22 expedition accomplished its mission and found the wreck, four dark miles from its last recorded location.

Shackleton’s journey quickly became one of the greatest survival stories in history. Although the Endurance’s fame doesn’t rival that of its near-contemporary wreck the Titanic, the forces that brought about the ship’s expedition are no less impressive than those that created that most ambitious passenger ship. It’s the same drive that pushed men to the moon, led to the founding of the internet, and has supported countless other advancements in science and technology over the centuries. 108 years after Shackleton’s initial journey, we can examine how the aspirations, collaborations, and curiosities that drove the first expedition endure today in the discovery and study of its wreck. 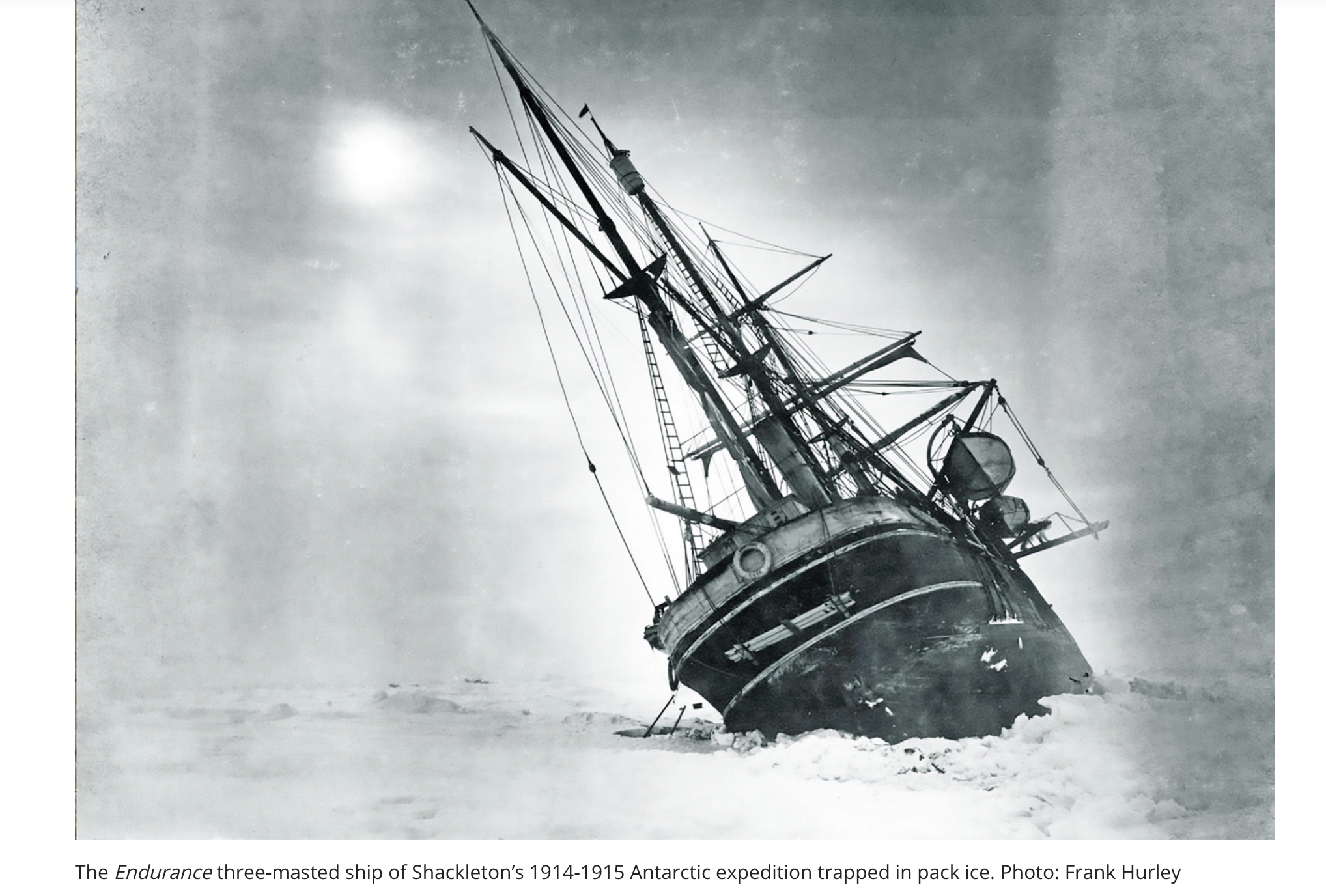 Shackleton’s expedition was one of many in the early 20th Century that sought to map the north and south poles and give us a better understanding of the world. With the promise of enduring fame and the hope of wealth and titles, or just an unquenchable thirst for knowledge and adventure, many men were driven to embark on these perilous journeys. In this period, men set out across the globe, summiting Mount Everest, unearthing ancient tombs, traversing deserts, and took flight for the first time. It was a period of rapid discovery and expanding knowledge.

When Shackleton’s team set out in the early 20th Century, their communication was incredibly limited, for it is hard to send and receive mail in uncharted territory. When success or tragedy struck, it would be months before anyone outside of the group knew.

Today, technology allows us to learn from the Endurance22’s expedition even as it happens. In addition to film crews and historians archiving the events as they happen, programs like Reach the World are engaging children globally in the action. Through Reach the World’s platform, students can watch a livestream of the expedition, explore their logbooks, and read crewmembers’ journals each day, rather than having to wait for the expedition’s end to gain insight. Through Endurance22’s own website and social media, we can get an up-close look at the technology they’ve deployed and the real-time excitement of the discovery.

Expedition leader John Shears underscores the impact that this open-access education can have by “allowing new generations from around the world to engage with Endurance22 and become inspired by the amazing stories of polar exploration, and what human beings can achieve and the obstacles they can overcome when they work together.”

None of this knowledge-gathering would be possible without many intersecting collaborations both then and now. To even sail off in search of knowledge, Shackleton and his contemporaries had to gain access to capital to fund their journeys, hire and feed crews, and maintain their ships. Expeditions like Shackleton’s are often held up as national accomplishments, but government funding was rarely if ever enough to actually finance them. Private financiers made up the difference, sometimes simply in support of knowledge and sometimes in order to buy their own spot in the action... Oftentimes, this private funding was a loan like any other, intended to be repaid upon the successful completion of the mission.

Once he had the necessary financing, Shackleton assembled a crew capable of undertaking a dangerous and harrowing journey. Ultimately his crew included meteorologists, sailors, surgeons, geologists, and navigators all of whom had to work well together under the best of conditions. When fate turned against them and their ship was caught in the ice, each man had to adapt to their new, perilous circumstances and work together to survive. If each man had not done his part, the outcome could have been far more tragic.

While Shackleton’s team was made up of his English countrymen, Endurance22 is a thoroughly international collaboration, reflecting the global interest in recovering what knowledge we can from the century-old wreck. The Endurance22’s journey is funded by the Falklands Heritage Trust, South Africa has provided the ship, automobile manufacturer SAAB developed the state-of-the-art underwater vehicles that allowed the crew to probe the ocean floor and ultimately find the ship, British production company History Hit has been on hand to film the entire expedition, and the talent of the crew came from around the globe. Marine archeologists, scientists, engineers, and documentarians have all been integral to the expedition’s dual missions of discovering the wreck, documenting their work, and educating the public.

Although Shackleton’s name is the best-known of the Endurance expedition, his efforts would have gone nowhere without collaboration and support from countless other individuals and institutions. Today, the collaborative efforts of the Endurance22 have succeeded in solving the century’s old mystery of the ship’s final location. It is far too early to know the impact of this discovery and what we may find onboard the ship, but even reaching this point has excited interest around the globe in history, geography, and technology. It is a triumph of knowledge, public-private collaboration, tenacity, and curiosity that demonstrates the positive power of human ambition.

*Photo Courtesy of The UK Parliament